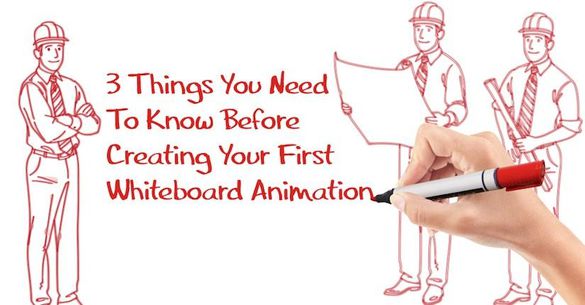 Thu Dec 1 2016
By: Mike P
The average person watches approximately 16 minutes of video advertisements per month. Some analysts believe that this number will double over the course of the next five years, largely due to an increase in quality content.

One cost-effective approach that many businesses are taking to push quality content for their brand is creating whiteboard videos. Whiteboard videos (sometimes referred to as explainer videos) are short three to five minute videos that walk the viewer through a particular problem, story, or concept. Using the backdrop of a traditional whiteboard to serve as a blank slate for the story, the narrator’s words are visualized with the help of illustrations.

Given that whiteboard animations welcome virtually any subject matter one can think of, it’s no surprise that many companies have begun to implement this design element into their advertising campaigns. But there’s more to whiteboard videos than simply talking about a product or service and adding some fancy animations alongside it. In fact, whiteboard advertisements are arguably one of the most carefully constructed forms of video advertisements, as they rely heavily on the art of salesmanship, copywriting, and visual cues.

With a company slogan like “show what’s happening” our team at Magnatag knows a thing or two about making the most out of visuals. So in an effort to help your business get off the ground and start producing video advertisements that actually convert, we put together a list of must haves for whiteboard animations.

A Master-Class Script
Before you even begin to think about what type of images will work best for your animation, you have to have a solid script set in place. But what exactly does a good script entail? The key to a good script is having a story to tell. Regardless of whatever product or service you’re selling, your whiteboard animation has to have a concrete beginning, middle and end.

The goal of storytelling from an advertising sense is straightforward: to either directly or indirectly link your brand to an emotional response. The idea behind this train of thinking is that customers are more likely to engage with a product when they see others do the same. So be it a vulnerable story about a struggling single-mother who used your product as a source of empowerment, or a cook that used your services to help enhance their service, the goal is to show your audience the value of your story.

There’s no better way to show that value than by drawing up a problem-solving scenario. By creating a situation that illustrates the importance of your product or service, your audience will likely take more interest in what you have to say.

Create Engaging Animations
Now that you have created an awesome story you need to create some visuals to go with it! The entire purpose of visuals in a whiteboard video is to illustrate your story and reinforce your message. It’s important to keep this in mind as you create your animation, as visuals should always be treated as supplemental to what you are trying to say. To keep with the theme of a whiteboard video, you’ll want to keep animations simple. We recommend sketching some ideas out on paper beforehand and building upon those drawings on your computer; but realistic and engaging visuals will only get you so far.

Timing is another element of the design process that should be considered paramount to the visual structure of your advertisement. Visuals should pop when introduced in the script and disappear when no longer relevant. When creating whiteboard animations of our own, our resident animator prefers to add time codes and animation notes to the script itself, making it easier to visualize how everything falls together.

As far as actual time constraints are concerned: Kinetic Social recently conducted a study that determined the average Facebook user is likely to watch the entirety of an advertisement if it falls somewhere between a 30-60 second window—and while your advertisement will likely find an audience outside social media, this seems like a pretty good benchmark to strive towards.

Find The Right Voice For Your Story
There’s absolutely nothing worse than watching an extraordinary video with less than spectacular voiceover. We’ve all came across the occasional YouTube animation that comes paired with crackly quiet audio and let’s face it: it’s unprofessional. Your advertisements are an extension of your brand and should be treated as such. Invest in a voice that fits your message and run with it. Websites like Fiverr host thousands of professional voice over actors that can be contracted on a word-by-word basis. What are you waiting for? You have the tools for success, now it’s up to your team to develop this winning formula into an effective advertisement. If you need any help with brainstorming and organization along the way, our website features over 2300 dry erase products that can help elevate productivity in your workplace.
Categories:General Business