Blog posts that relate to organizational maps that are displayed on any surface written by the Magnatag team. 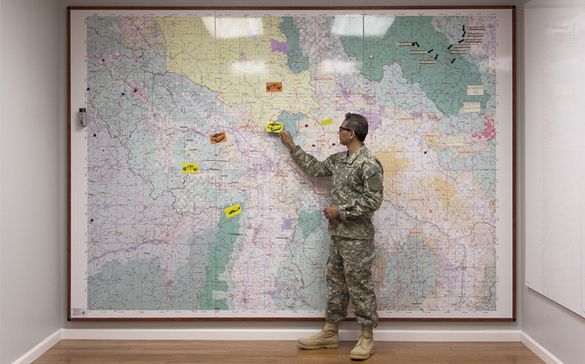 What Proven Tech Helps Members Of The US Military Prepare?

Fri Mar 4 2016
By: Mike P
Before the days of smartphones and GPS monitors, we relied on maps to help us navigate the unknown. There was never a need for accessories or an extra set of laser pointers due to the hands-on nature of a physical map. Nowadays, finding your way around the world takes a matter of seconds with the help of computer programs and other tech friendly navigation tools. Yet at Magnatag, we still find a large majority of our customers relying on the pragmatic nature of physical maps to help accomplish tasks on an extremely large scale.

A Guide To Map Systems And Cartography

Thu Jan 9 2014
By: Tom Shaw
Cartography, or map making, is a practice that has been around for centuries. The oldest map known to man could date back as far as the late 7th millennium BCE, and the oldest surviving maps are generally thought to be the Babylonian world maps created in the 9th century BCE. The history of cartography is closely tied to our own human history, since we have been making maps for as long as we have been navigating the world around us.


Traditional Cartography vs. Modern Cartography
The history of cartography is a fascinating subject because there have been so many massive developments over the centuries. The technique has changed dramatically as technological advancements have been made, but the cartography definition has stayed the same-whether drawn by hand or created with a machine, the practice of making maps is still very important to mankind. Maps were originally drawn by hand using basic instruments like ink, brushes, and parchment, and became much more accurate upon the invention of the compass.