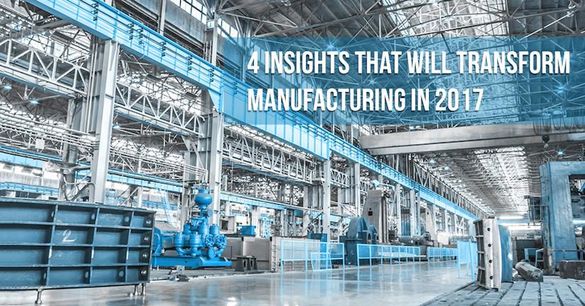 4 Insights That Will Transform Manufacturing In 2017

Thu Jan 5 2017
By: Mike P
With the holiday season now behind us, it’s time to look ahead at what 2017 has in store for the future of the manufacturing industry. 2016 ended on a high note, bringing with it speculation of good things to come for the year ahead. With that in mind, we created a list of four possible game changers the manufacturing enthusiast should keep an eye on in the New Year.

An Increase In Pricing of Metal Commodities:
The most recent ISM (Institute for Supply Management) manufacturing Report on Business noted that steel—in addition to other metals such as copper, aluminum and brass—has been rising in price since the index first registered scores of above 50 back in 2016. For reference, a score above 50 in the index signifies a period of stabilization for the industry. Given that both the ISM index and the price of metal commodities have shown signs of continuous growth over the past six months, it doesn’t seem out of the realm of possibility to assume there is some degree of correlation in play. Tracking the price of metals and other raw materials can serve as a benchmark for the industry’s performance ahead of the ISM’s regularly scheduled reports.

An Escalation In Equipment Spending
Compared to last year’s $3.5 billion in equipment spending, the US is projected to spend an additional 8% ($3.78 billion) on new equipment in 2017 according to Assembly Magazine’s 21st Annual Capital Equipment Spending Survey. It’s noted that only 16% of survey respondents plan to spend less than they did the previous year.

This data can be interpreted in two ways: Most evidently, the increased budgetary spending points towards a respectable industry forecast for 2017. Any time a business is willing to increase spending, an increased ROI is expected a result. The fact that nearly 50% of those surveyed plan to increase spending only lends to the possibility of an uptrend for manufacturing in 2017. On the flip side of the spectrum, an increase in equipment spending could also lead to an increase in autonomous machinery. With newer machinery requiring less manpower to operate, it’s entirely possible that the workforce could potentially see a loss of jobs as a result. Both scenarios are entirely possible, making the focus on equipment spending something every manufacturing expert will want to keep a close eye on.

A Fluctuating Workforce Dilemma
The manufacturing industry and its workforce was a major headline of the 2016 election cycle, and with all politics set aside, it’s a topic that doesn’t seem to be disappearing in 2017. Ford recently announced the cancellation of a $1.6 billion facility in Mexico for the production of the Ford Focus, which retroactively comes with a $700 million investment in their Flat Rock, Michigan facilities. The investment is said to bring an additional 700 jobs to the Michigan economy, adding on to the additional 50,000 new jobs SoftBank CEO, Masayoshi 'Masa' Son, pledged to bring to the US in late 2016. These early reports of increased opportunity for American workers should indicate a strong 2017 for the industry, but with labor costs up over 2% from 2016, it’s likely that smaller manufacturing facilities will attempt to cut labor costs over concerns of profitability heading into the New Year. While larger corporations will have little issue increasing their annual labor costs, many smaller manufacturers are already showing signs of trepidation, with as many as 72% of manufacturers looking to decrease labor costs moving into 2017. However, t’s possible that these concerns may be offset by the recent economic stimulation, leaving much to the imagination for the future of manufacturing labor in 2017.

A Rise In ‘Smart Manufacturing’
There’s been a lot of talk of the Internet of Things (IoT) as of lately and the impact it will inevitably have on the manufacturing industry. For the uninitiated, The Internet of Things is the interworking of devices—in the case of the manufacturing industry, machinery and vehicles—embedded or paired with electronics and software that allow for data to be easily collected and exchanged. Advanced technology presents the promise of faster production cycles and waste elimination; two benefits that are sure to have an immediate impact on the way organizations manage their value streams. Many  manufacturing experts believe that 2017 could be a year of transition for the industry, as many facilities are expected to begin cycling in new forms of integrated machinery to future poor their factories. While the transition will not happen over night—or even over the duration of a single year—2017 will likely serve as a foundational building ground for a new revolution of manufacturing, providing new insights as to where the industry is headed over the course of the next decade.
Categories:Factory and Production