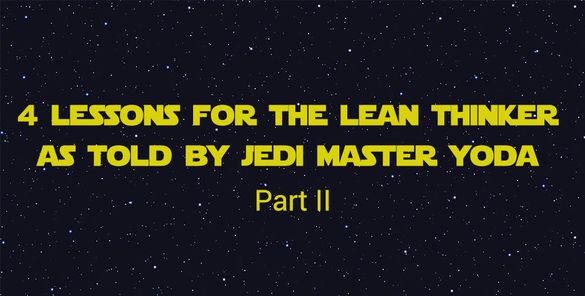 Thu Dec 14 2017
By: Mike P
Not long ago, in this galaxy, we wrote a blog post sharing some words of advice for the lean manufacturer as told by everyone’s favorite 900-year old little green goblin-looking humanoid, Yoda. With the newest chapter in the Star Wars Saga, The Last Jedi, hitting theaters this Friday, we thought it’d be fitting to once again revisit some of Yoda’s philosophical teachings and see how they can enhance the lean thinker’s quest to reach True North.

“Much to learn you still have, my old padawan.” … “This is just the beginning!”
Everyone that’s even remotely involved with the manufacturing industry understands the importance of Toyota, the Toyoda family, and their relationship with lean. When you really think about it, the Toyoda family and the Jedi Knights aren’t all that different: both have spent a lifetime perfecting their art; they’ve been molded by their experiences—some would argue that they embody their craft—and have been made all the wiser in doing so. A few months ago, the current President of the Toyota Motor Corporation, Akio Toyoda, sent out an open letter to address the standing of the company after the financial crisis. After detailing the company’s missteps in recent years and presenting a few course-corrections the company will take in the future, Toyoda took ownership of his responsibility to lead the company in the proper direction. The letter ends with Toyoda listing a few philosophies he believes in and will keep in mind for the company’s future, one of which, bears a striking resemblance to the above quote from the wise Jedi Master: “I believe there is no “best,” only “better.” Continuous improvement is a fundamental component of lean, and one that is far too often ignored or swept to the side. It’s easy to become complacent once you’ve made improvements, but if you’re serious about lean, you must continue to innovate and problem solve. Much like the path to becoming a Jedi Master, the path to becoming a Kaizen master never truly stops.

“Fear is the path to the dark side. Fear leads to anger. Anger leads to hate. Hate leads to suffering.”
It’s safe to assume that your quest for true north doesn’t involve facing off against an evil empire, a wrinkly old man that projects lightning bolts from his fingers, or a mysterious bounty hunter, but that’s not to say that developing a lean program is not without its own set of obstacles. One of the most common obstacles lean startups face is a lack of support from executives. It’s not uncommon to hear that a lean initiative or startup failed to get off the ground due to a lack of engagement or support from an organization’s highest-ranking officers. To put it simply, many executives don’t understand the value of a lean transformation; they think of it as a cost-cutting, corner-rounding, activity. Lean leaders need to identify executive fear prior to a transformation and alleviate any hesitations that may sway executive leadership. The only “dark-side” to a lean transformation is failing to see the light at the end of the tunnel.

“I cannot teach him. The boy has no patience.”
Luke didn’t become a Jedi overnight; it wasn’t until he fell flat on his face, that he was able to understand the critical role patience plays in the path to becoming one with the force—developing lean is no different. A Kaizen culture cannot be developed in a matter of days, weeks, or months. Your organization needs to understand that developing lean takes time. Sure, you may find pockets of success within a month, but in order to see a long-lasting culture change, you need to be in it for the long haul.

“If you end your training now — if you choose the quick and easy path as Vader did — you will become an agent of evil.”
The entirety of the Star Wars series—up until this point—has revolved around the Skywalker family’s struggle to grapple with the powers of good and evil. While Luke was able to persevere through his Jedi training and become a poster child for the galaxy’s greater-good, the same cannot be said for his father. Anakin’s journey to the dark side and eventual transformation into Vader symbolizes the sensitive relationship between difficult life choices and their impact on the future. Yoda’s warning to Luke alludes to this relationship—and better yet—to the lean transformation process perfectly: Anytime an organization jumps ship and abandons their lean program, they’re inviting the three evils of manufacturing (Muda, Mura, and Muri) to creep their way back into day-to-day operations. Aborting a lean program midway through its development does nothing more than reinforce the exact behavior you initially set out to correct.
Categories:Factory and Production