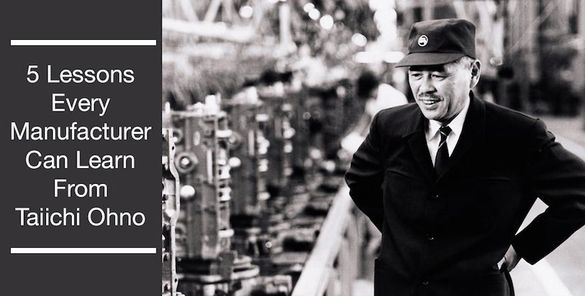 5 Lessons Every Manufacturer Can Learn From Taiichi Ohno

Tue Feb 7 2017
By: Mike P
The name Taiichi Ohno is sure to raise a few eyebrows in a room full of engineers; after all, he is the co-creator of the Toyota Production System! Widely recognized as the father of both the Just-In-Time and Seven Wastes principals, Ohno’s teachings have shaped the pathway of modern manufacturing as it stands today. Over the past few decades, Tachii’s basic principals of manufacturing have undergone multiple transformations, influencing areas outside of manufacturing and making a larger impact in western business practices. Ohno unfortunately passed back in 1990, but not without revolutionizing the way organizations isolate wasteful components and draw focus to areas of improvement. In an effort to celebrate Ohno’s upcoming birthday (February 29th), we put together a list of some of our favorite lessons we can all take away from the father of lean manufacturing.

“No one has more trouble than the person who claims to have no trouble”
This quote is reminiscent of the famous Toyota expression “No problems is a problem”—something should not be overlooked. The story goes that Ohno interpreted problems at Toyota as an opportunity for improvement as opposed to a moment of weakness. This philosophy later bled into the culture of the Toyota Production System, and more specifically, how management conducted root-cause analysis. When an issue would arise, Ohno would encourage his team to look at the situation without any preconceptions as to what may have gone wrong. By doing so, he hoped his team would search for multiple possibilities for improvement, as opposed to an isolated issue. You cannot move forward if you are unwilling to reflect upon both your successes and failures. There’s no single person that executes his or her job to perfection, and it’s under this belief that everyone can show some room for improvement if under the proper guidance.

“The more inventory a company has, the less likely they will have what they need.”
It’s no secret that manufacturing is all about supply and demand. The real trick of the trade is finding a way to balance inventory levels as efficiently as possible. After personally speaking to hundreds of Factory Managers over the years, this still seems to be an issue that is of constant frustration to supply chains across the globe. Unfortunately, the components that are most frequently used are also the ones that are in constant shortage. It’s an issue that Ohno noticed in the very early days of the Toyota Production System, leading him to develop Kanban in hopes of better managing inventory levels. Much like the early days of Toyota, manufacturers in 2017 need to have a reliable means of demand forecasting to best manage inventory.

“One thing you can’t recycle is wasted time.”
Time and resource management were of the upmost importance to Taiichi Ohno and Toyota as they began development of the Toyota Production System. A large focus of Ohno's teachings sought to teach trainees to tell the difference between non-value-added work and value-added work. The driving force behind this development was the philosophy that time is the most valuable asset a factory can possess.  Toyota functions with the understanding that employees and materials can be added and removed from a project when needed—the same cannot be said for time. To combat the number of ways time can be wasted within the value stream, manufacturers must learn to ‘think lean’. From finding new ways to organize your value stream, to creating innovative solutions used to minimize employee incidents, manufacturers must be able to create an environment that sustains growth.

“Without standards, there can be no improvement.”
Employees cannot learn and succeed without first specifying what needs to happen in order for your operation to improve. Standards are an instrumental part of Six Sigma efforts and Kaizen cannot be met without the proper fundamentals set in place. Both management and their workforce need to be trained to understand current practices and question how they fit into established processes. In order for a factory to continue growth, you have to ensure that everyone is on the same page. For instance, if a specific process of a value stream needs to be adjusted to enhance production, manufacturers need to be able to develop an optimized solution that can be both executed and obtained consistently. By standardizing processes and adhering to a Kaizen cycle, factories can spend less time scanning for problems and more time planning from the future.

“We are doomed to failure without a daily destruction of our various preconceptions.”
Ohno developed his Toyota Production System as a way to problem solve through experimentation. One of the many early issues he took with the early Toyota factories in particular was their insufficient problem-solving mechanics. Sure, it was easy to find a problem and create a solution on the spot, but by doing so, the company was losing valuable resources via the simple-fix mechanic. He believed that perhaps if operators were to take a more observational approach to problem solving by thoroughly analyzing of the situation at hand, perhaps they would be able to discover a long-term fix for the issue. At the time, Ohno’s approach to problem solving seemed rather foreign to an industry fraught with innovation. It wasn’t until much later that his concepts would be put to practical use in the form of five why questioning and root-cause analysis. Taiichi’s quote holds a strong message that still rings true to this day: In order to maximize problem-solving efforts, manufacturers have to be willing to approach issues with an open mind.
Categories:Factory and Production