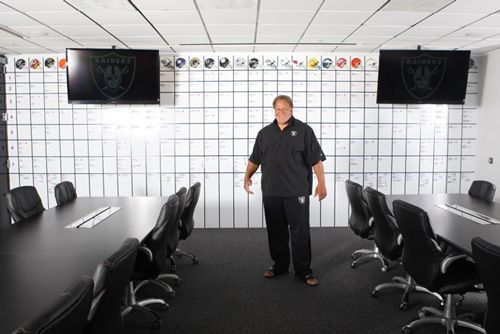 Behind the Scenes of the 2015 NFL Draft

Tue May 5 2015
By: Victoria Burns
After a disappointing 3-13 record last year, there was an immense importance for the Oakland Raiders to have a successful draft last weekend. With proper preparation and state of the art war room that included Magnatag Visible Systems’ WhiteWalls® (magnetic whiteboard wall paneling), the Oakland Raiders were equipped to execute a successful draft.

Knowing how important the fourth overall pick was to the Oakland Raiders franchise, General Manager Reggie McKenzie, the coaching staff (led by Head Coach Jack Del Rio) and the scouting department spent months gathering an enormous amount of information that needed to be manipulated in a way that is easily digested to prepare for the 2015 NFL Draft. In a recent press conference, Del Rio spoke about how well the team prepared.

“The importance, in my opinion, is the inclusiveness to validate and value the work that is done by the scouts and by the coaches that do a great job of digging and researching and calling around and watching tape and just spending time trying to help us determine where a player belongs for a rank on our board,” said Del Rio.

Leading up to the draft, the personnel department uses the war room to host meetings between scouts, coaches and other football personnel.

The state of the art war room allowed them the ability to display important player information (ranking, height, weight, etc.) that is not only visual and easily understood by all decision makers in the war room, but is also easily manipulated and is vital for working through the chaos of the NFL draft.

During the draft, the personnel department is situated in the war room where there are magnetic whiteboards and whiteboard walls, which helps them keep track of prospect rankings overall and by position.

“Every wall in the war room is covered with floor to ceiling with WhiteWalls provided by Magnatag.  The magnetic capabilities of the walls afford for player information to be arranged and displayed in a myriad of different formations and styles,” said Tom Blanda, Stadium Development and Operations for the Oakland Raiders. “The write on/wipe off capabilities of the walls allow for the easy addition of notes and other details to the magnetic labels put on display.”

The boards include magnetic cardholders with their scouting information including height, weight, speed, vertical jump and hand size.

Having these cardholders gathered in an easy to understand and organized way allows team personnel to react instantly as the draft progresses.

“I think from a visual concept, from a depth chart; to be able to sit back and look at it from that viewpoint is super important, ” said Blanda. “The ability to sit and look at the whole field (the offense and defense) on a magnetic board is invaluable to these guys.”

After months of preparation, the Raiders were able to execute a strong draft strategy, which many analysts believe will result in a much stronger 2015-2016 season.