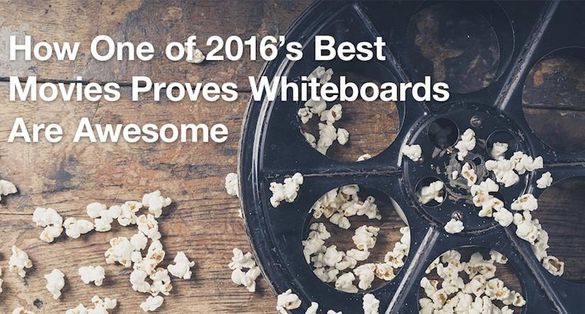 How One of 2016’s Best Movies Proves Whiteboards Are Awesome

Fri Nov 18 2016
By: Mike P
This past weekend I got a chance to catch the new Amy Adams film: Arrival at my local movie theater. If you haven’t already, I highly suggested you check it out. The film covers numerous themes such as loss, love and the unknown; set against the backdrop of an alien invasion—but it challenges the conventional formula of your typical sci-fi blockbuster.

Adams plays the role of Louise Banks: one of America’s top Linguistics professors, hired by the US Government to comprehend exactly what type of threat the ominous foreign spacecraft presents. With the fate of the entire globe left in her hands, Louise must establish some line of communication between humanity and the alien species without provoking a war.

As it turns out, learning an alien language is a bit more complicated than picking up a copy of Rosetta Stone and sitting down with your favorite snack—it requires a much more hands on approach.

The first couple encounters with the aliens are less than stellar: Louise cannot make out any indistinguishable sounds in the language, the aliens give off no physical indicators of any sort; it quickly becomes clear to the entire team that their conventional understanding of communication does not apply. Rather than brute-force her way through the problem, Adams’ character insists upon teaching conventions of the English language to the aliens only to ask the inevitable question: “what is your purpose on earth?” To do so, Louise enlists the help of one of Magnatag’s favorite communication tools: the whiteboard.

She begins her discovery of the unknown language by using basic pronouns to describe the objects and people in the room. Using the whiteboard as a source for communicating the word in question, the team attempts to convey its purpose using rudimentary teaching principals like acting and pointing.

The acts that follow aren’t much different than those that are displayed when teaching a child to read or write. Scenes of Louise slowly pronouncing the word "human" or acting out the definition of "walking" are sure to jolt the memory of any parent in the audience. Of course, nearly all children have some degree of understanding for the English language before learning proper spelling and grammar, but the fact that the aliens in this film have nothing to base our language off of makes this movie all the more special.

It’s this deviation from the archetypal first-encounter popcorn flick that makes Arrival so unique. Rather than wielding a gun to combat an extraterrestrial encounter, the film strives to be something different, using intellect and the practicality of a whiteboard as humanity’s ultimate asset.

There’s no blasting their way through a cavalry of high-tech spacecraft, or abductions gone awry; collaboration and teaching are the only viable options in this instance.

Watching the way Louise works through basic conventions of a completely unexplored language is mesmerizing—even if it’s a complete work of fiction. It’s the idea of taking a complex and completely foreign language, and breaking it down to a level of mutual understanding that truly shows the value of visual communication.

And that’s something that our company truly believes in: that whiteboards are best put to use when dealing with complex scenarios. Our customers have proven time and time again, that there’s no better way to communicate and develop complex ideas than on a whiteboard.

Just think about it: Our entire economy revolves around intricate algorithms and technologies that are completely bewildering when looked at from a technical level. Every day millions of engineering, marketing, and sales teams rely on the help of visual communication to help come to a mutual understanding of what is trying to be accomplished for their brand. While it’s not the discovery of an undiscovered alien species, there’s still an immense importance for visual communication in the 21st century.

This testament is echoed throughout the course of the film, but instead of developing new product specs, the researchers in the film are in search of understanding something much larger in scale.

There’s an argument to be made that Arrival is one of the best original films of the year. But beyond the cinematic merits of the film, there’s also proof that visual communication—and to a smaller extent, whiteboards—play an integral part in the development of technology.
Categories:Whiteboard / WhiteWall®