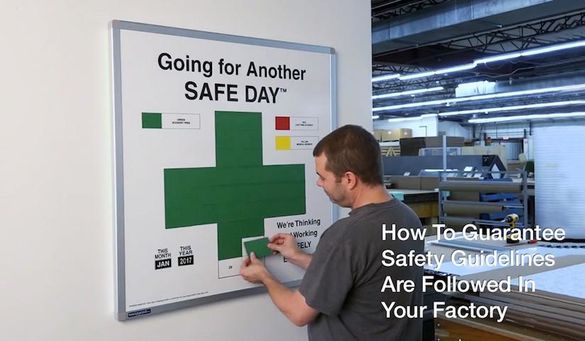 How To Guarantee Safety Guidelines Are Followed In Your Factory

Fri Dec 2 2016
By: Mike P
In 2015, worker injuries and illnesses went down-from 10.9 incidents per 100 workers in 1972 to 3.0. The Occupational Safety and Health Administration—which is a subdivision of the US Department of Labor—plays a large part in guaranteeing that this statistic continues to follow a downward trend.

In an attempt to maintain this statistic and ensure that their workplace is in accordance with National and State labor laws, many companies have started to reshape the way safety is defined in their culture.

About two years ago, National Grid Electric & Gas reevaluated the steps they were taking to build a safer working environment; of the many things they found, one aspect in particular caught our interest: although employee safety reports were conducted on a weekly basis, their lack of visual engagement was hindering communication efforts—something that was particularly troubling to members of National Grid’s management team.

“Injuries are taken very seriously here [National Grid] and safety has been part of our ongoing ‘performance excellence’ efforts. So whenever possible, we like to show that there’s an ongoing investment in the safety of our employees” said Kurt Kach, Process Manager of National Grid’s New England South Division.

Over the course of the next few years, National Grid would oversee a complete revamp of their safety tracking systems, in an effort to better accommodate and encourage cross-departmental communication.

The safety reports that were previously reported on a weekly basis are now nonexistent. Rather than recording safety metrics on a weekly basis, the National Grid team now monitors safety performance every morning at a centralized ‘performance hub’. The hub is treated as the heart of National Grid’s safety efforts, with metrics and documents readily accessible throughout the area, the location serves as an effective communication tool for upper-management and the workforce.

Working as a component of National Grid’s performance hub, Magnatag’s SafetyCross magnetic whiteboards serve as a real-time tracker for safety milestones throughout the course of a given month, giving both management and workers the ability to visualize how their safety efforts are being received.

While only a mere part of National Grid’s safety efforts, incorporating the SafetyCross whiteboards into National Grid’s tool set has served to keep members of management and the workforce informed on the latest status of the facility and staff.

“We use the SafetyCross boards during our morning briefings. Since they are always up to date, we like to use the charts to look into whether or not incidents are occurring. They [SafetyCross boards] give us a good idea as to how our platform is performing. I think having the boards readily accessible creates some degree of competition amongst our workers, which concurrently enhances our focus on safety.”

With over 200 SafetyCross boards being used across National Grid’s many facilities, the company continues to strive towards a safety program that ensures every worker
Categories:Factory and Production