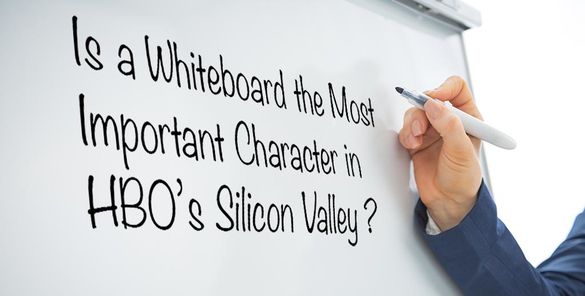 Is a Whiteboard the Most Important Character in HBO's Silicon Valley?

Thu May 4 2017
By: Mike P
Last week HBO’s hit comedy about the American tech industry, Silicon Valley, kicked off its forth season with a major game changer. In last week’s premier, one of the show’s main characters, Richard Hendricks (played by Thomas Middledich), walked away from his start-up tech company (Pied Pieper) in favor of pursuing a new passion project. This departure had been in the cards for some time, with Richard falling in and out of love with the idea of owning a company he no longer believes in since the show’s early days. However, watching how the decision will affect the shows additional characters looks to be a main source of inspiration for the series going forward.

Silicon Valley is at its best when it pairs the debauchery and fraternization of the show’s five-man company with the cutthroat, brilliant, and somewhat hyperbolically tone-deaf realities of America’s fastest growing metropolitan area. While the show is no stranger to poking fun at the absurdity of launching a tech startup in one of the most overpriced—and self absorbed—hot-spots in the nation, it does so through the lens of each of the show’s characters, making it all the more enjoyable. There isn’t an episode that goes by without garnering a full-blown belly laugh on my end—and it’s not because I have a vetted interest in incubators and venture capitalism—the characters and their interactions are just that good.

Which makes it all the more surprising that one of the show’s central characters is dangerously overlooked. No, it’s not Erlich Bachman and his quest to become the next Steve Jobs, or even Jared Dunn and his excessive string of optimism; it’s actually not even a person at all. If you’re still scratching your head and wondering who—or better yet what—it is I am exactly referring to, I’ll save you the trouble: it’s the company whiteboard. The whiteboard has followed the Pied Pieper gang around for the entirety of the series’ four-season run, serving as a source of innovation for the team’s engineering and marketing efforts.

Dedicated fans will remember the whiteboard as a tool that was instrumental to the development of Pied Piper, providing the team’s engineers with a blank slate to develop the company’s acclaimed compression algorithm—albeit a bit unconventionally. Over the seasons the whiteboard has stood the test of time, working as a central hub for brainstorming sessions, facilitating numerous visual gags—all of which are a bit too inappropriate to be posting on our company blog, but funny nonetheless. When you really stop to think about it, some of the series’ best moments happen with that board in the frame, and it’s no coincidence either.

Early on in the development of the series, the creators spent a fair amount of time pinpointing a piece of technology for the show to revolve around. The challenge was to find technology that would be difficult to reproduce from a technical standpoint (something the industry commonly refers to as deep-tech), while simultaneously offering a concept that’s easy for the average viewer to comprehend. That’s where the idea of compression technology derived from. Everyone understands the value of compressing large files, but regardless of how small you can make something, there will always be room for improvement. In an effort to aid in the development of the show’s technical aspects, the creators enlisted the help of Stanford P.H.D. student Vinith Misra, as recommended by one of the University’s leading experts in compression technology, Tsachy Weissman.

As previously mentioned, Vinith’s goal was to develop an algorithm that was not only believable, but also visually engaging—a challenge that proved to be more difficult than one would initially assume. The issue with modern lossless compression is that when data is being compressed, the entirety of the file is essentially recreated within the original file itself. There are few moving parts outside of that structure, thus making any visualization lackluster in scope. In turn with this realization, Vinith began experimenting with another compression methodology known as lossy compression. Lossy compression works by removing unnecessary components of a file, and thereby approximating the end result. Both the removal and approximations that can be found in lossy compression require multiple moving parts to be executed properly, which makes the end result all the more complex when drawn out—a perfect solution for someone that’s looking to sell the audience on the validity of their math.

Vinith’s algorithm is the essential plot device for the show. Its development progresses the story forward; it motivates the characters; it’s a device that modifies alongside the story. In order to communicate the value of something that’s inanimate, the show-runners needed to have a tool that would facilitate visualizing information of this magnitude. Think back to when you watch the show: how often do the characters discuss the algorithm without the help of a visual aid? The mathematics—however fictitious they may be—are still far too complex to expect the average fewer to retain and comprehend, hence the regularity in which the whiteboard is used.

While calling an inanimate object a character may be a bit of a stretch in the eyes of some, there’s no denying that there’s just as much intent behind its contents as there’s for any of the characters. The whiteboard may not be as funny, witty, or intelligent as some of the show’s more animated stars, but it provides just as much value to the story and its progression.
Categories:Whiteboard / WhiteWall®