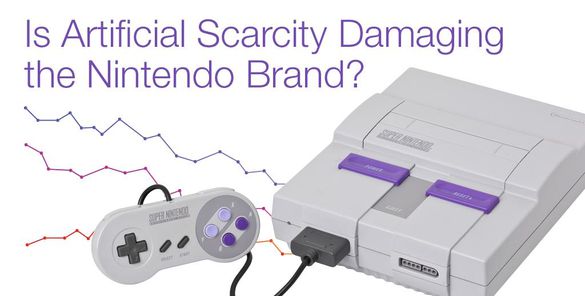 Thu Aug 31 2017
By: Mike P
A few months ago Nintendo officially revealed their latest iteration in hardware revivals with the announcement of the Super Nintendo Classic (or better known by its internet nickname: S.N.E.S Classic). The S.N.E.S Classic is a miniature reimagining of the classic Super Nintendo system from the 90s that comes preloaded with 21 games that span the system’s 13-year manufacturing cycle. While the system’s announcement took the Internet by storm, Nintendo’s manufacturing history indicates consumers should proceed with caution before boarding the hype-train.

This isn’t the first time Nintendo has gone back to the nostalgia machine for a quick payday: just last year the company released a miniature version of the original Nintendo Entertainment System that made waves during the holiday season. Over the course of the console’s five-month retail lifespan, Nintendo stock rose to an eight-year high, with the company selling over 2.3 million systems in a mere five-month period. However, the company ran into a few issues on the manufacturing side of the business, with supply failing to keep up with popular demand and the system disappearing off store shelves within seconds of the product’s release. Consumers and industry analysts expected the company to continue to ship units well into 2017 in an effort to offset the system’s overwhelming popularity, yet Nintendo abruptly discontinued production of the retro console just five months into its lifecycle.

The most unsurprising element of Nintendo’s circumstance in particular, is that the company has recently experienced the highs and lows of both overestimating and underestimating the demand for their products. First, it was the over-production of the Wii U console that sat on store shelves for years after an underwhelming response—a major factor in the company’s four-year operation loss. Then there’s the case of Nintendo’s line of amiibo action figures, which were so popular, the company fell months behind in production and was forced to delay an entire wave of figurines. In the past, the company’s shown the propensity to act in response to demand, so why do production mishaps keep occurring?

Some industry experts theorized that the company discontinued production on the popular console in an effort to avoid over-saturating the market before the release of their newest hardware, the Nintendo Switch, which was released in March of this year. It’s a totally plausible scenario, but the respected products seem to target to different types of gamers. Though the more popular theory making its way around the industry suggests that the stock shortages and the eventual discontinuation of the NES classic were self-inflicted. The idea is that Nintendo is creating artificial shortages in their inventory, manufacturing just enough units to create a buzz and nothing more.

It’s a practice we’ve seen time and time again in the business world. For instance, the gem industry is entirely dictated by the concept of artificial scarcity, as only a select number of companies have access to the world’s diamond reserves. De Beers, one of the globe’s largest mining companies, aggressively controls the supply of diamonds that arrive on the open market by artificially cutting availability. As fewer diamonds are let into the marketplace, prices increase and De Beers can begin selling gems at an above-average price point.

The theory that Nintendo is practicing a similar strategy when it comes to their manufacturing efforts jives well with the consumer reaction to the console’s scarcity, as there are currently over 100 systems listed on eBay starting as low as $189.99 (MSRP was $59.99). Even a year after its announcement, the system has maintained a high level of relevancy and demand—something that very few discontinued products ever achieve. Nintendo could easily produce thousands of additional units to meet demands and profit, yet the company seems to have no interest in extending the product’s shelf life. Unlike De Beers and the diamond industry, Nintendo has nothing to gain from the secondhand sales of their products, which makes their decision to discontinue the NES Classic all the more puzzling. From the outside perspective, watching Nintendo fail to meet consumer demand feels like a massive slap in the face to the millions of the company’s most dedicated fans.

So what does Nintendo have to gain—if anything—from creating an artificial scarcity? For starters, inventory shortages work as a tremendous PR machine for a company with an in-demand product. Think back to any holiday of recent memory: There’s always that single product that no one can get their hands on, but regardless of however rare and difficult to find it may be, somehow it always manages to make its way to the desk of every morning and late-night talk show in the country. People like to have the new “it-product”, and something that is in high-demand and is seemingly impossible to find drives value in the short-term.

From a manufacturing perspective, Nintendo seems to be using a hybrid push-pull strategy for their supply-chain management. History suggests that the company doesn’t do well with long-term forecasting, and rather than have another inventory mishap on their hands, Nintendo’s distribution model likely wants to take advantage of economies of scale by only pushing out products they are guaranteed to sell. As a result, these products become harder to find in retail locations, but they are never left to go to waste. From this point forward, a manufacturer’s production efforts are typically based off of consumer demand.

When manufacturing a product at a larger scale, companies are often required to take on larger investments to front production costs. So in Nintendo’s case in particular, where demand is superseding inventory, the second wave of production costs greatly outsize the production of the first round of consoles. Nintendo’s manufacturing strategy grants decision-makers with a period of reflection, which gives their manufacturing team time to analyze the popularity of a product before planning the next round of production or deciding to increase the product’s cost. Creating an artificial scarcity is a pro-business move that prioritizes profits over consumer happiness. Period.

As we all know, rather than creating units to meet demand, Nintendo elected to cut manufacturing short—which was likely a move that was made to eliminate any excess capacity in the manufacturing process and maximize profits. Sure, the company was able to gain some traction by making the system impossible to find, but if the consumer reaction by the SNES Classic is anything to go by, the company’s goodwill with customers is dwindling quickly: Within minutes of the console’s announcement, fans took to social media to poke fun the system’s believed lack of availability. There’s an inherent distrust and confusion between the fans and the company, and Nintendo doesn’t seem bothered by it in the slightest. There was never an honest reason for why the NES Classic was canceled; they’ve yet to comment on the current shortages of Nintendo Switch stock, and they’ve been vague about the details surrounding the SNES Classic launch. For a brand that has survived off the loyalty of hardcore fans for the past several years, it’s almost shocking that Nintendo hasn’t taken note of neighboring Japanese company, Toyota, and their customer-first approach to manufacturing

For over 75 years, Toyota has focused on listening to the voice of the customer within their supply-chain system. That’s made possible by Toyota’s focus on continuous improvement, as “the origins of quality lie in the spirit of audit and improvement”. The goal is to maintain a facility that actively improves as time progresses, adjusting to customer-demand and production mishaps, thereby avoiding any bottlenecks that may degrade the relationship between the customer and manufacturer. Toyota maps their value-stream in a way that will exceed customer expectations and recognizes that quality and customer satisfaction go hand in hand.

It’s not a difficult concept to grasp, which makes it all the more frustrating that a public facing company as large as Nintendo is having difficulty communicating and managing their manufacturing processes. It’s not beyond the realm of possibility to expect consumers to continue to grow disgruntled with companies like Nintendo that value profits and customer satisfaction as separate entities. As the medium of video games continues to mature well beyond the concept of “toys”, consumers will rightfully continue to expect more from manufacturers. Images provided by the following: Evan-Amos, SNES-Mod1-Console-Set, CC BY-SA 3.0
Categories:Factory and Production