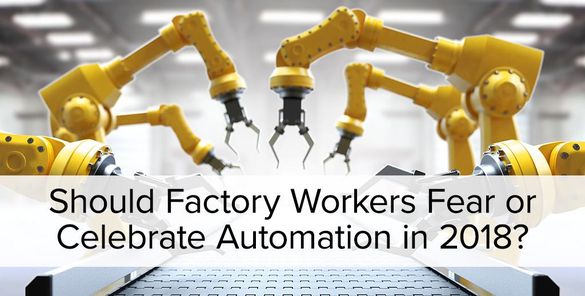 Should Factory Workers Fear or Celebrate Automation in 2018?

Mon Dec 11 2017
By: Mike P
According to a 2017 report from the UN Conference on Trade and Development, the rapid increase in robotic automation is projected to affect roughly two-thirds of all jobs worldwide. Now, exactly how those jobs will be affected and its relation to the future of the manufacturing industry is still up to debate. Some theorists believe that adverse effects of automation will be short-lived, increasing productivity growth and thereby increasing worker income, while those that are more pessimistic believe that robotics may require a smaller number of better-skilled workers to operate, leaving millions of low-skilled workers unemployed. But is this something manufacturers should be worried about in 2018?

It’s a bit of an either-or scenario…

However, the fact still remains that two-thirds of all jobs in developing nations are in jeopardy due to the prevalence of automation—it’s a number that’s extremely concerning at first glance, but not entirely hopeless either. Ideally, the loss of these jobs will create new opportunities for high-skilled workers in under-developed areas, which should only develop the global economy further.

In the end, it seems that automation and its relation to the modern day manufacturer relies wholeheartedly on the willingness to adapt to the changing economy. If workers and corporations are willing to adapt their skillsets and embrace technology, then automation should provide the manufacturing industry and workforce with an incredible opportunity for growth over the next century. Of course, any country or manufacturer looking to benefit from the enhancements of robotic automation must be aware of the completion that lies ahead.

Robotics and Automation By The Numbers

For the past four years, China has seen the largest number of deployments in industrial robotics with over 500,000 additional robots purchased and implemented since 2013. This push for an increase in automation is all part of the Nation’s “Made in China 2025” initiative, which seeks to comprehensively upgrade the country’s efforts in innovative manufacturing and raise the overall production of components and materials by 70% in 2025. It’s a lofty goal no doubt, but one that can only be accomplished with an increased demand for autonomous machinery—and these numbers are not exclusively found in China. Manufacturers in North America are also striving towards an autonomous future, with over 300,000 industrial robots in place in the same four-year span. It’s estimated that robots currently manage roughly 10% of the world’s manufacturing tasks today, with that number estimated to rise to 25% by 2025.

It’s statistics like these that send a shiver down the spine of members of the manufacturing community—and understandably so; with autonomous output more than doubling in less than a decade, it’s nearly impossible to imagine what the manufacturing landscape will look like in another twenty years. The silver lining to this for members of the workforce is that widespread automation is not yet suitable for all industries. For example, over 250,000 industrial robots were distributed globally in 2015 and roughly 160,000 were solely distributed to automotive and electronics manufacturers, which left 90,000 to be distributed amongst metal, chemical, plastic, and food manufacturers. If these numbers are anything to go by, it’s clear that robotic automation has yet to reach the level of universal accessibility that so many fear.

Manufacturing will only continue to evolve as industrial robotics become increasingly accessible, but just because automation is on the rise, it doesn’t mean that factory workers will be extinct within the next decade, in fact, this advancement in supply-chain technology presents an extraordinary opportunity for operators across the globe. Low-skilled work will continue to evaporate in exchange for better paying high-skill jobs, giving supply-chain operators a window of opportunity to develop a new set of higher-paying skills. With this in mind, factory workers should prepare to adapt to the changing manufacturing climate as opposed to fearing it.
Categories:Factory and Production