What We Got Right & Wrong About Manufacturing In 2017 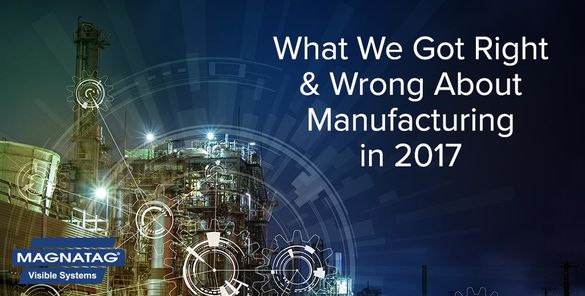 What We Got Right & Wrong About Manufacturing In 2017

Tue Jan 2 2018
By: Mike P
Last year we made a few predictions about what was in store for the manufacturing industry in 2017. As the year draws to a close, we thought it would be interesting to revisit our predictions and see what we got right—and wrong—about manufacturing in the New Year.

Prediction #1: 2017 Will See An Increase In Pricing of Metal Commodities
Last year, we predicted that the price of metal commodities would increase based upon an ISM (Institute for Supply Management) manufacturing Report on Business noted that steel—in addition to other metals such as copper, aluminum, and brass—had been rising in price since 2016. After reviewing the October 2017 report, we can confirm that our prediction was correct. Prices of raw material are entering their 20th straight month in growth, with The Business Survey Committee noting an increase in the price of metals in particular.

Prediction #2: 2017 Will Experience An Escalation In Equipment Spending
Based Upon Assembly Magazine’s 21st Annual Capital Equipment Spending Survey, we predicted that 2017 would welcome an increase in equipment spending. According to November’s MAPI Industrial Outlook Report, “There has been a significant acceleration in the pace of business equipment spending growth since the early months of 2017.” While we won't have a final total for the year’s spending until 2018, MAPI’s outlook report has us feeling confident our prediction will prove to be correct as the forecasted growth in equipment spending it on track for a 4.2% growth.

Prediction #3: The Manufacturing Workforce Demand Will Continue to Fluctuate
In our 2017 predictions, we contemplated that larger corporations would have little issues increasing labor costs, while smaller manufacturers may look for countermeasures to lower costs, which would result in a small bump in employment year over year. The October 2017 employment statistics report that was prepared by Analysts of the National Estimates Branch highlighted that roughly 24,00 jobs were created in the manufacturing industry between September and October. If you take a closer look at the provided graph, you’ll notice that employment changes were positive with the exception of machinery, printing, and textile product mills. You may notice that, consequently, these manufacturers are also suffering employment losses over a 12-month period. 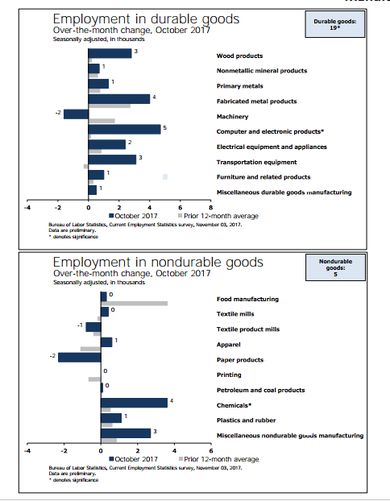 So what impact did this have on the industry as a whole? The National Bureau of Labor Statistics currently estimates that employment in the manufacturing industry has grown by 130,000+ jobs in 2017 alone. For reference, 34,000 jobs were lost in 2016 and 60,000 were added in 2015. With manufacturing employment trending upward year over year we’ll chalk this prediction up as a win in our book.

Prediction #4: There Will Be A Rise In ‘Smart Manufacturing’ In 2017
We predicted that 2017 would be a foundational building year for the future of smart manufacturing, and since it’d be a bit difficult to quantify exactly what classifies as a “foundational building year”, we figured it'd be best to look at the available statistics and leave the rest up for you to decide.

First, let's start with an overview of smart manufacturing landscape today: 67% of industrial manufacturers have reported they have an ongoing smart factory initiative set up in their factory as of March 2017. As for other manufacturing sectors, aerospace and defense sit at 62%; automotive and transportation at 50%; energy and utilities at 42%; consumer goods at 40%, with life sciences, biotech, and pharma combining for 37%. These statistics are all part of a comprehensive survey on smart manufacturing conducted by the Capgemini Digital Transformation Institute. It’s also worth noting that the report also estimates that 43% of all manufacturers have an operational smart factory initiative set up in their factories. Unfortunately, Capgemini’s research does not go into detail regarding annual smart manufacturing growth on an annual basis, which brings us to our next item of discussion.

As detailed in a report by BCC Research, the global market for smart manufacturing is expected to grow from $159 billion in 2015 to $392 billion by 2020 at a compounded annual growth rate of 19.8%. This projection helps put Capgemini’s research into a bit of perspective and places 2016’s smart factory numbers somewhere around 35%. Using the same calculations, we can assume that over 50% of all global factories will have adopted smart manufacturing initiatives by the end of 2018.
Categories:Factory and Production