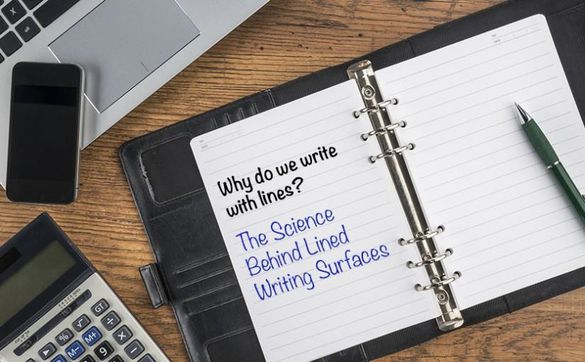 Why Handwriting Matters For The Development of The Brain

Mon Sep 19 2016
By: Mike P
It’s Tuesday, September 7th; it’s 3:00 PM and all across the nation, children have finally completed their first day of school. They get home and leave their shoes at the door; it’s time for you to ask roughly 50 questions regarding their new teacher and classmates—but not before you grab them a post-school snack—and in the meantime, they’ll unload their entire backpack all over your clean house. Amongst the many folders and crayons that now litter your kitchen table, there will undoubtedly be a lined notebook buried within the chaos.

Recognized as an essential item for any back-to-school checklist, the lined writing surface—and the entirety of the school supply industry in general— has remained unchanged in today’s rapidly evolving technological landscape. It’s no secret that lined writing surfaces serve a distinct purpose in providing structure to an otherwise blank slate, but after a bit of thinking about my own schooling experience, I couldn’t help but wonder what other benefits—if any—lined surfaces present underneath their face value.

After some Internet sleuthing, I stumbled upon a study that had been conducted by GA Lindsay, of the University of Sheffield’s Education Department, back in 1983. The study aimed to take a look at the effects lined and unlined paper has on the writing ability of young students. It was found that legibility increased among younger children using non-lined paper, but decreased when applied with older participants. In turn, when the same study was applied using lined paper, the exact opposite was found to be true: older children possessed legible handwriting, while younger children struggled to do so. Some researchers have since hypothesized that this correlation is due to the cognitive differences that can be found between a child in their early and later years (4-10 and 10-16 respectively).

At an extremely young age, our brains have yet to be conditioned by any sort of outside influence, meaning concepts like structure and organization are developed over time and through the power of influence. As a result, it makes sense to incorporate some degree of developmental engagement into the educational curriculum. Finding a real-life example of this requires you to look no further than the two most popular forms lined stationary: College and Wide Rule.

With both stationaries differing ever so slightly, it can be difficult to differentiate the pair at first glance. Standard College Ruled paper comes with 9/32 inch spacing between lines and 1¼-inch vertical margins, while Wide Ruled paper (often referred to as Legal Ruled paper) features 11/32-inch margins with vertical margins identical to its College contemporary.

Wide Ruled paper, typically found at earlier levels of schooling, feels most at home with young children still developing their fine motor skills. With the reason for this being: the 9/32-inch spacing offers more surface area for writing to be placed within. Handwriting instinctively feels less cramped and letters can be developed in a larger writing space.

While on the other side of the American stationary spectrum, College Rule is commonly used as a standard page for higher levels of education. With smaller spacing between lines, the stationary is preferred by writers that have a more profound grasp on the mechanical functions of handwriting.

After taking a look at how both stationaries serve a unique function for different levels of education, it’s rather apparent that handwriting and marginal line structure pair hand in-hand with—or at the very least reinforce—the concepts of cognitive development. Without practice and proper fundamentals, handwriting can become a demanding task that requires a high amount of neurological resources, which will directly influence one’s ability to carry out high-ordered tasks. Students use wider spacing options to work on the fundamentals of spacing and motor skills, and transition towards a more refined structure when ready.

Once perfected, the function of handwriting becomes second nature for many, serving as a stepping-stone for educational advancement. According to a study conducted amongst 2nd, 4th, and 6th grade students by Dr. Virginia Berninger, a professor of educational psychology at the University of Washington, those who used handwriting regularly wrote more words, wrote words faster, and expressed more ideas than those who favored keyboarding.

Similar findings were also discovered by Laura Dinehart, an assistant professor at Florida International University’s College of Education, as she studied the correlation between proficient handwriting and the relationship it shares with academic success: She found that students that received good grades on fine motor writing tasks had an average GPA of 2.93, while those that struggled to develop proper handwriting techniques received a much lower 2.21.

Notably, both Dinehart and Berniger’s studies hint at a correlation between productivity, success, and the written word: the more developed and comfortable a student is with their handwriting capabilities, the more likely they are to succeed within the classroom.

After fully absorbing the information at hand, such results feel deeply connected to Dr. Lindsay’s findings regarding legibility and cognitive development. A proper framework is required to develop motor skills, and developed motor skills are required for proper handwriting, which can ultimately lead to more success in the classroom. It may seem a bit like a connect-the-dots moment, but one that surely cannot be ignored.

On a base level, writing with the help of lined and gridded surfaces provide us with a sense of organization, providing context to notes that would be otherwise inexplicable. But beyond guiding the structural organization of a letter, lined and gridded writing surfaces serve as a foundational tool for the cognitive development of young students. It's perplexing to think that as elementary as lined paper and gridded dry erase surfaces are, there's still an immense amount of complexity behind the science of why we use them today.
Categories:Productivity