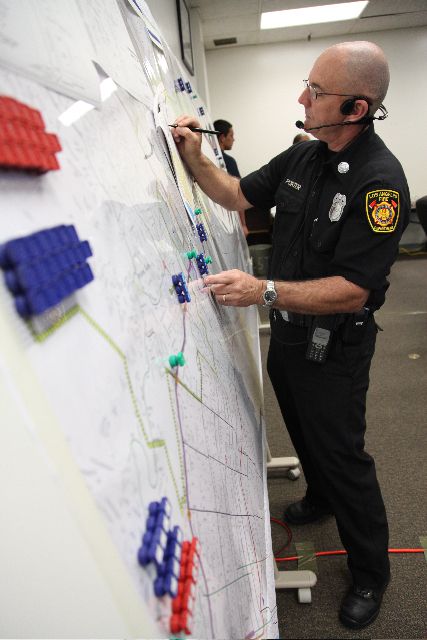 Sat Apr 25 2015
By: Victoria Burns
As the two year anniversary of the Boston Marathon bombings passes and the 119th Boston Marathon begins, emergency squads must take extra precautions, planning for months before marathons to make sure they run smoothly and everyone is safe. The Los Angeles Fire Department was eager to share their idea with other emergency preparedness teams in hopes of making their jobs easier.

“We get a lot of people who watch and look to the LAFD to see what we do and the resources we use and we want to make the job easier for ourselves and if we can help other people with our idea, then that’s what we want to do,” said Edward Tumbleson, an LAFD firefighter and situation leader.

“We use a map and we label the WakTacks by fire resource (ambulance, fire engine, bicycle medical team) to show where they are on the LA marathon course. The WakTacks work great because we can move them in real time as resources move,” said Edward Tumbleson. “We are one of the main supporters for the marathon and we supplemented the Santa Monica resources with ours.”

Tumbleson says they also plan to use the WakTack magnets for planned events such as the Academy Awards, VIP events, marathons and catastrophic events to track resources in real time. The LAFD uses this as a complimentary visual aid to their geographical information system (GIS).

“We have a form in the GIS but there’s always a chance that the technology we have will fail,” said Tumbleson. “We use the map and magnets and it’s really a great visual tool.”

The WakTack magnets were purchased for the LAFD by the Los Angeles Fire Department Foundation, a non-profit organization that is a major source of private funding for the LAFD and supports the LAFD by supplying essential equipment, training and public outreach for them. Because 96% of the city’s LAFD budget is allocated for salaries and benefits, it’s difficult for the LAFD to get the resources they need to do their job successfully.

“The LAFD Foundation is fantastic,” said Tumbleson. “If it weren’t for [the Foundation], we wouldn’t have the WakTack magnets and other equipment we need to do our job.”

The Los Angeles Fire Department Foundation has received dozens of donations ranging from $5 to over $100,000 to help the LAFD. In addition to the LAFD, Magnatag has provided products to over 100 fire departments to help them plan, track and manage their operations.

“Overall, Magnatag is great. Your magnets have worked out great and they make our job easier,” said Tumbleson.
Categories:Planning